You are here: Home / uncategorised / Bushfire impacts on hydrology
FacebookTweetLinkedInEmail 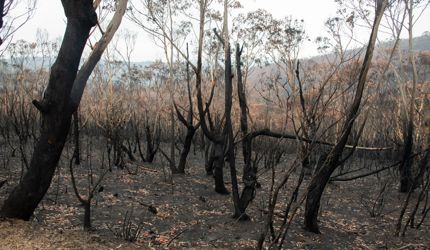 Changes to the quality of runoff

Past bushfires have resulted in significant water quality emergencies, for example:

Changes to the quantity of runoff

Bushfires in Australian eucalypt forests lead to significant detrimental impacts on runoff volumes, and the quality of runoff.  Numerous studies (Langford, K. J. 1976; Kuczera, G. A. 1985; Hill, P. I. et al. 2008) have found that for a given rain event, runoff volumes initially increase compared with pre-bush fire rates, then significantly reduce before returning to pre-fire rates as the regrowth forest matures.  This behaviour is shown below:

Destruction of the forest and canopy, and death of the trees, is the major driver of the short-term change in runoff rates, as the trees can no longer transpire, and the canopies no longer intercept rainfall.  As the trees regrow and mature the leaf area of the canopies increase, and root zone becomes deeper.  The increasing leaf area leads to higher transpiration rates and so reducing runoff, and the deeper root zone enables the growing forest to access water from deeper in the soil profile, also contributing to reducing runoff as the trees regrow.

Murray-Darling Basin Commission, Risks to Shared Water Resources, Impact of the 2003 Alpine Bushfires on Streamflow: Modelling the impacts of the 2003 bushfires on water quality in catchments in Victoria and New South Wales, 2007

Sheridan, G.J. et al. 2007, Quantification of hillslope runoff and erosion processes before and after wildfire in a wet Eucalyptus forest, Journal of Hydrology, Vol 323, pp. 12-28